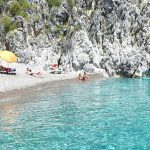 A stay at Camping Athena gives you the opportunity to discover and explore one of the most beautiful and unspoiled areas of Campania: Cilento. Rolling hills, rugged coasts, coves and cliffs, small charming villages, art and history, breathtaking beaches, sea awarded with the Blue Flag frieze for the great respect for the typical environment of these places.

The Cilento area is part of the Cilento and Vallo di Diano national park, which aims to protect the area’s rich natural heritage.

The archaeological areas of Paestum and Velia, for all lovers of the history of Magna Grecia.

Punta Licosa, whose legend has it that it was born of unrequited love: the desperate siren Leucosia decided to launch herself from the cliff and her body then took the forms of the island of Licosa.

Castellabate, one of the most beautiful villages in Italy, among hills, medieval village and pristine marine area of ​​Santa Maria, protagonist of the fil “welcome to the South” with Claudio Bisio and Alessandro Siani. “You don’t die here,” said Gioacchino Murat in 1811 and the phrase is engraved on a stone plaque inside the medieval village.

Speleological routes with the caves of Pertosa-Auletta, the only speleological site in Europe where you can navigate on an underground river, entering the heart of the mountain, and the caves of Castelcivita, a complex of karst caves particularly rich in stalactites and stalagmites with a thousand forms.

Mountain routes, with Mount Cervati (in the municipal area of ​​Sanza), the highest in Campania with its 1899 meters, a karst environment, with sinkholes, fresh springs and temporary streams.

He deserved a quote from Virgil in the Aeneid, Capo Palinuro, land of ancient myths and great beauty, location of famous films, such as The Argonauts, Hercules conquering Atlantis, Wonder Woman, Summer holidays of 1985, Fatal provocation of the 1990 and We believed in Martone. Reality and myth come together in this evocative land, which takes its name from Enea’s nocturne, who fell into the sea and left his name to the locality. Sea, beach, the famous Blue Grotto, rocky coasts, boat tours, renowned restaurants where you can discover fragrant gastronomic treasures.

Let’s not forget the suggestive waterfall of the Hair of Venus, which comes from the waters of the Rio Bussentino. It is named in honor of the lush plant called “maidenhair” that characterizes the oasis.

We can talk about Cilento for hours, but we don’t want to reveal all our aces up our sleeve. Stay tuned.